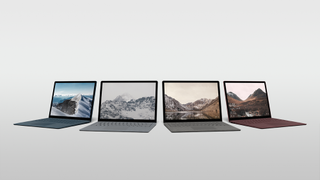 Rumors of Microsoft preparing to launch a new Surface Laptop 2 device at its October 2 press event have just been bolstered from an unusual source: Netflix’s superhero show Iron Fist.

As the eagle-eyed journalists of German website WindowsUnited.de report, at around the 50:54 mark of the first episode of Netflix Iron Fist Season 2, a character is seen using a black laptop-like device with Microsoft’s logo on the back – the same one stamped on the company’s range of Surface products.

Product placement in high profile TV shows and movies is commonplace, but it’s rather unusual for a product that hasn’t been officially released to make an appearance.

We only get a very brief glimpse of the device, so we wouldn’t call this concrete evidence, but with rumors swirling that Microsoft is planning on releasing a black Surface device, apparently known as 'Surface Black' internally, this could be a little hint of what’s to come.

Meanwhile, another rumor suggests that the Surface Laptop 2 and the Surface Pro 6 will make an appearance at the event on October 2, and while both machines will offer updated specifications, they could cost the same as their previous generation predecessors.

This is welcome news, and comes courtesy of Winfuture’s Roland Quant, who tweeted that we’ll see the two devices with the same price as before. He also notes that we won’t see any other hardware.

About Microsoft's hardware event on Oct 2: expect Surface Pro 6 and Surface Laptop 2. At the same prices as before, with updated hardware. And likely nothing else.September 26, 2018

We don’t have long to wait to find out how accurate these leaks are, and we’ll be at Microsoft’s event reporting live on whatever the company has to show.