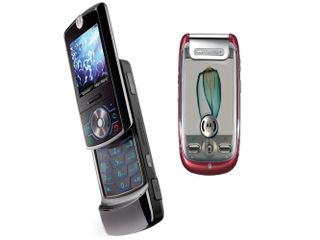 Ed Zander, Motorola chairman and chief executive officer, took the stage this morning in Las Vegas to launch Motorola's new music-on-mobiles platform, Motomusic. If Apple is about to launch a long-rumoured iPod phone later this week at MacWorld, this is the perfect time for the mobile companies to fire some warning shots.

The announcement itself introduced two new Motorola handsets. The first, the MOTORIZR Z6 , is a swish slider phone with 64Mb of onboard memory and the option of a 2Gb microSD card. The second model, the MOTOMING is described as a mobile entertainment centre and features a transparent front window, integrated FM radio and a 2 megapixel camera.

While Motorola once partnered with Apple for the ill-fated ROKR handset, the two new phones are distinctly anti-iTunes. The MOTORIZR uses Microsoft's Windows Media Player software to play and synchronise tracks and to connect to online music stores. The MOTOMING, meanwhile, is a Linux-based phone and uses RealPlayer software for its music playback. Both phones will be available towards the middle of 2007.

"Consumers can look to Motorola for what we call cool²", said Ed Zander. "that's cool experiences enabled by cool devices."

That wasn't all that Motorola had to offer this morning. Like many other companies at this year's CES, Motorola has one eye firmly on the concept of 'entertainment everywhere'. Future products need to be customisable, easy-to-use and give their users the ability to access their content whenever they want and wherever they happen to be.

To this end, Zander announced a partnership with Yahoo! to support Yahoo! Go for Mobile 2.0 on RAZR handsets, complete with Yahoo!'s oneSearch service, which uses location-based technology to refine your search results to your immediate local area.

Maloney demonstrated Motorola's Follow Me TV technology, a Slingbox-esque approach to the digital home that enables consumers with Motorola DVRs to placeshift video, pictures, music and more throughout their homes and to compatible mobile devices like mobile phones and laptops.

Like Sky's Sky by Mobile system in the UK, the Follow Me TV (FMTV) system extends to mobile phones like the RAZR, which can be used to program the set-top box whilst the user is away from home. 'Connected experiences' such as this that blend together hardware, software and web-based services are becoming a key theme of this year's show.

"From the cool device you carry to the TV shows you watch, we no longer are confined to a specific place or device to get what we want," concluded Ed Zander. "Motorola's making it happen with new and compelling devices that work together to erase the barriers between places and services."