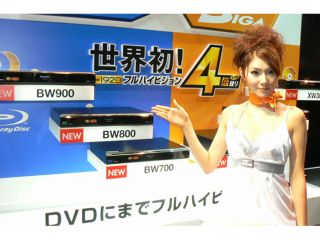 The annual CEATEC electronics show just outside Tokyo got off to a flying start this morning with Panasonic's keynote presentation underlining the industry's current strong emphasis on all things televisual.

The company's major announcement was a domestic Blu-ray recorder that combines a 1TB hard drive with the ability to record far more high-definition programming on a single Blu-ray disk than ever before possible.

Thanks to a new signal processor known as the UniPhier, the Diga DMR-BW900 can fit 18 hours of HD TV on a 50GB disk. The chip compresses the typical 17Mbit/s MPEG-2 stream of a HD broadcast in real time into a much smaller MPEG-4 AVC stream that takes up less space on the disk.

Previous generations of recorders managed to fit just four hours into the same space, as they lacked the ability to compress the video stream on the fly and had to settle for filling their disks with the full-fat broadcast.

As well as recording to BD-R and -RE disks, the top-end Diga - several others with smaller hard drives were also announced - can store up to 380 hours of HD TV on its 1TB hard drive.

At ¥300,000 (£1,273), the BW900 isn't cheap but the exponential leap in HD TV recording capacity guarantees it will sell well in Japan. The company said it has no plans at present to shift sales to other markets, but the technology is sure to reach the West, with Sony set to introduce similar compression chips in its recorders.