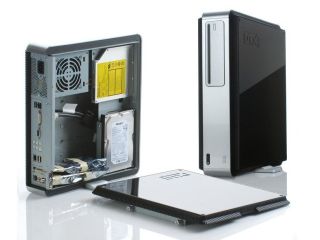 When AMD announced its DTX chassis spec at this year's CeBIT show in Hannover, the news was met with bored mumblings. Finish up, move on.

But AMD is making good on its promise to deliver the new specification in small format PCs. At Computex AMD has announced a series of chassis conforming to the DTX specification - which, the company says, it has now finalised.

AMD also announced new 45-watt energy-efficient processors at the show. Based on 65nm technology, the Athlon X2 dual-core BE-2350 and BE-2300 are designed for the DTX specification.

"Our leadership of the DTX initiative, combined with the introduction of new energy-efficient desktop processors, demonstrates AMD's belief that an open standards approach to driving innovation is the best way to enable solutions," he said.