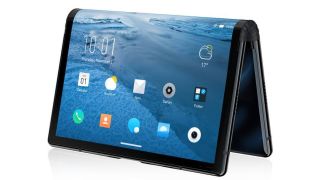 Royole took the world by surprise when it revealed the world's first foldable phone - it's called the FlexPai - earlier this year, but the company isn't out of ideas as it may bring its innovative tech to wearables too.

According to patents spotted by LetsGoDigital, the Chinese manufacturer has an idea for what looks to be a smartwatch with a foldable display.

It looks similar to existing smartwatches at first, according to the patent's images, but its rectangular display can be unfurled so it's around three times the original size.

All versions of the display seem to be touchscreen. So if you want the watch screen to be folded up, you can still interact with the device but you'd be able to fold it out for more intensive tasks.

You can see it in action with the images below. It's also powered by a flexible battery, which is a part of the band itself.

There are two separate patents using the same sort of screen technology, but each has a different style of band.

There's no confirmation that Royole is actively developing this technology as both of these patents were filed in 2017. Often patents never become devices you can actually buy, but it may be the case that the company is exploring the idea of a foldout display on a wearable.