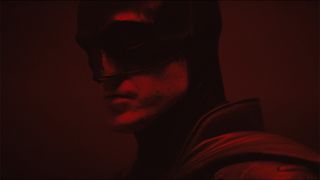 Following months of anticipation, director Matt Reeves (Cloverfield, Dawn of the Planet of the Apes) has finally lifted the veil on his new film The Batman, offering our first look at Robert Pattinson decked out as the Caped Crusader.

Based on the (admittedly dark and brief) camera test footage embedded below, The Batman's new batsuit can best be described as 'sharp', in that it is both stylish and incredibly angular.

Leading into a close-up of Batman's chest plate armor, the video reveals plenty of straight-cut lines and no rounded edges whatsoever. That same design approach appears to carry over to the costume's shoulders and arms, giving the suit a tough, industrial appearance that wouldn't look out of place alongside the Tumbler from Christopher Nolan's Dark Knight trilogy.

As for The Batman's cowl, that does appear slightly more rounded. Though the darkness of the footage makes it little difficult to see, it appears the cowl is made out of leather – if you look very closely, you'll notice it's been stitched together from various parts.

Along with giving us a look at Pattinson in costume, the video also offers us our first taste of composer Michael Giacchino's menacing score for the film, which already sounds like a classic in the making.

Due for release sometime in 2021, The Batman will be squaring off against Zoe Kravitz as Catwoman, Colin Farrell as the Penguin and Paul Dano as the Riddler, and will be aided by Jeffrey Wright as James Gordon and Andy Serkis as Alfred.