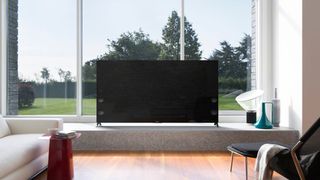 Anyone considering investing in a top-of-the-line TV – the type suited to 4K Netflix binging – but concerned it will leave too little dosh behind for a suitably high-end sound system may find Sony's new TV range has the answer.

If you have the cash for Sony's X9400C and X9300C panels, you may not need any additional audio equipment, as Sony's latest flagship tellies are the first in the world to feature in-built speakers compatible with high-resolution audio.

The TVs can access hi-res audio files via a USB drive or networked computer, but – even if your music library is primarily made up of MP3s – Sony claims compressed audio will sound better playing through it's new panels, thanks to some effective upscaling.

The OS enables users to Google Cast content from their smartphone or tablet (iOS and Android only – Windows and Blackberry are left out in the cold) and PC to their TV.

Games, music, movies and TV shows can all be accessed from Google Play, as well as a range of apps. These number in the hundreds rather than the thousands, though, as they need to be resubmitted to Google to ensure they're optimised for TV.

Voice search also makes an appearance for anyone wanting to find content or ask general questions of Google's search engine without using their fingers. Sony performed a demonstration of this at their TV launch that proved to be quite accurate.

The top half of Sony's range deliver 4K, featuring the new 4K Processor X1 chip, which is designed to enhance an image's clarity, colour and contrast.

Sony claims that the chip analyses the input video signal and then processes it accordingly, matching images with a 4K image database. It then increases clarity and definition while reducing noise as it upscales to 4K.

The chip is also designed to produce a wider brightness range – brighter lights, deeper blacks – though it remains to be seen whether Sony's offering or LG's new OLED is the stronger competitor.

Most of the range is available now, except for the 55 and 65-inch X9000C, and the 75-inch X9100C, which are expected in August. Pricing for these panels will be announced closer to the release date.