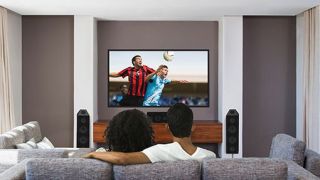 Tech conglomerate Samsung has unveiled pioneering smart TV software that can be controlled with your brainwaves at the Samsung Developer Conference in San Francisco.

It may sound like another unnecessary step away from the humble remote control, but the new technology could have a hugely positive impact on people with disabilities, specifically those with quadriplegia and other forms of paralysis.

Samsung says that the research (dubbed 'Project Pontis') can help "users with physical limitations to change channels and adjust sound volume with their brains", with the aim of "providing accessibility to people who cannot move or have extreme limitations on their movement."

Samsung started Project Pontis three months ago, teaming up with the Center of Neuroprosthetics of the Ecole Polytechnique Fédérale de Lausanne (EPFL) in Switzerland.

So how do you make television software that can be controlled by brainwaves? Apparently, the first thing you need to do is to collect samples of how the brain behaves when a user wants to do something, for example, selecting a television show.

Once you have enough data on how the user's brain works, and specifically on the different types of brainwaves it generates in different situations, it can be used to create a model. Combine this with machine learning, and you have software that can react to different brain behaviors - in this case, controlling smart TV software.

Keep an eye on it

The prototype unveiled at the conference requires the user to wear a headset containing 64 sensors while they look at an eye tracker.

Right now, the technology is able to identify when the user has selected a movie by tracking their eye movements, and can use artificial intelligence to build a profile of the type of movie the user likes - making it even easier for them to select a film.

Samsung hopes that in the future, it will be able to create a system that relies on brain signals alone, as eye tracking technology won't work for people who have unreliable or no control over their eye muscles.

Still, it's very early days for the technology, and we won't be seeing it on the market any time soon - but it is an exciting step forward in the world of accessible technology.