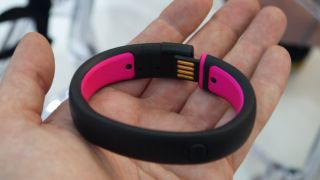 Nike has confirmed that it is downsizing its Fuelband team, and the latest rumour suggests that Apple's iWatch has a little something to do with it.

Mashable says a source "familiar with Nike's thinking" claims that the plan is to open Nike's software to other wearable platforms.

The same source "strongly implied" that one of these wearables would be Apple's long-rumoured iWatch, which is expected to finally shows its face this year.

Of course, Nike and Apple coming together on the iWatch makes a lot of sense given the closeness of the two companies – Tim Cook sits on Nike's board of directors, remember – and rumours of the iWatch having a strong fitness angle.

Last year, Apple hired Nike design director Ben Shaffer, which was a considerable hint that Cupertino was looking to the Fuelband for aesthetic inspiration.

Whatever Apple's cooking, we expect it'll also pack in a number of smartwatch features, something that the Nike Fuelband SE lacks.

Now, we're not saying that we predicted a Nike/Apple integration, but we kind of did...