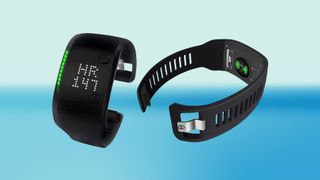 A combination of leaks have outed a new device from Adidas: the MiCoach FitSmart band.

The device looks like a rubber-clad fitness band (in both black and white), with LED dot-matrix-style display and heart rate monitor. It would follow on from the MiCoach SmartRun watch, which features GPS and heart rate tracking too, and comes with the same watch-style band.

The news comes from a variety of sources, according to Engadget: the product image from Keller Sports in the US, and the name is confirmed from both a trademark filing and the FCC listing too.

While we've not got any information on whether this is a replacement for the SmartRun watch or a separate wearable (elements like battery life or GPS integration aren't known) it appears at the same time as Google's Fit program was unveiled for Android L.

The new platform is an aggregator for health data, and Adidas has confirmed to TechRadar its partner plans:

"Adidas, the leader in global sports, will provide open access to its miCoach interactive training platform. For the first time, wearable sensors, workout data and professional grade training plans will be connected from adidas miCoach to Google Fit.

"The initial three miCoach devices planned for integration into Google Fit will be; Speed Cell, X_Cell and the Smart Run sport watch."

It would have been unlikely that the firm would have confirmed an unreleased device, but it looks like the early Google Fit lineup might have been set already – making the FitSmart all the more mysterious.

We'll be doing some more digging and we'll let you know what we turn up about this new device.