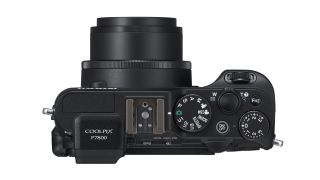 The premium Nikon P7800 has an integrated viewfinder - remember those?

Nikon has introduced two new compact cameras for its Coolpix line, including the S02, an incredibly small compact aimed at casual users, and the P7800, a premium compact at the other end of the spectrum designed for advanced users.

At the back of the camera is a 3 inch RGBW LCD vari-angle display, while new for this camera is an electronic viewfinder. Previous iterations of the P series camera have included optical viewfinders, but the most recent P7700 had no finder at all.

Other specifications include raw format shooting, full manual control and full HD video recording. The camera is compatible with a range of accessories for DX format (APS-C) DSLRs, such as the WU-1a wireless transmitter.

Also announced today is the S02, a replacement for last year's Nikon S01, one of the smallest compact cameras currently available on the market.

One of the most significant improvements is its 13 million pixel CMOS sensor, compared with last year's 10 million-pixel CCD device – that should mean the new camera is capable of producing better images.

The camera is designed to take on smart phones, providing better functions such as a 3x optical zoom and built-in Xenon flash to beat the specifications of the majority of phones.

Other features include Full HD video recording, an internal memory and a 2.7-inch, touch-sensitive screen. At just 100g, Nikon says the camera is light enough to be worn around the neck at events and parties.

Nikon has also announced a new LED flash unit for Nikon compacts and compact system cameras. The LD-1000 offers a continuous light source, which is particularly designed for macro photography and video work. As it is a continuous light, the effects of the flash can be viewed via the camera's viewfinder or LCD screen. It also offers a vari-angle head.