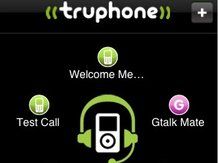 Truphone Anywhere has already proven to be a success on the iPhone and now it's making the jump to Android – allowing people to call anyone in the world on Google Talk for the price of a local call.

The service has been a hit on the BlackBerry, Apple's iPhone and Nokia, and is now making the jump to the Android OS.

"We want to make it as easy as possible for people to have conversations with their communities around the world in whatever form they choose," said Truphone CEO Geraldine Wilson.

"We passionately believe in devices like the Android and iPhone that offer easy user access to applications through the Android Market and the App Store in Apple's iTunes. The G1 and the entire Android platform is an obvious and important distribution channel for us," she added.

As well as its phone call service, Truphone promises users the capacity to instant message friends on multiple networks from within one application.

At the current time there is only one phone using Android in the UK, but that will change in the coming months. For now T-Mobile G1 Android users can download Truphone Anywhere, which is available in the UK and US.