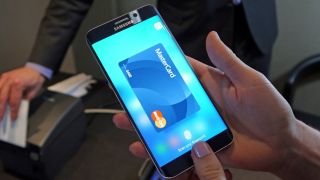 Samsung Pay is officially launching – after a long old wait – and we've found out a load more details about the service launching in the coming weeks.

Samsung originally announced its own mobile payments system back in March this year, but chose to not share many details and keep the finer details until this late in the year.

Samsung is now ready to roll with the launch of the new Galaxy Note 5 and Galaxy S6 Edge+. Samsung Pay will work just like Apple Pay by using NFC on the phone and on the shop terminal.

Not just any payment system

Unlike Apple Pay though and in an attempt to boast universal acceptance, Samsung Pay is using MST technology where you can make the payment on a magnetic strip.

That's the bit where you swipe a credit or debit card down on a shop terminal, meaning you'll be able to use it in almost any shop - a real issue for other contactless payment providers.

Unlike Apple Pay, Samsung Pay also allows you to use a PIN as well as using the fingerprint sensor for authentication.

To make a payment you'll be able to swipe down from the lock screen, select your card, hold your finger up or enter the PIN and it'll do the rest.

Security is a big concern for Samsung Pay as well with the company integrating KNOX's real-time hacking surveillance and rooting protection alongside the security input code.

Samsung ensures us that the card details are not stored on the phone or on Samsung's server either.

Samsung Pay is launching in South Korea on August 20, the US on September 28. As for the UK, Spain and China, Samsung EVP and head of Samsung Pay Injong Rhee said it plans to roll out the service there in "the near future," with partners to be named in each market.