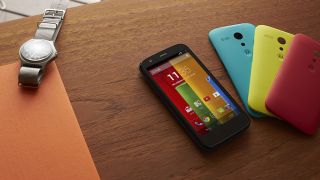 What will Motorola have instore for us next?

Motorola's next phone is set make its grand entrance on May 13.

The Lenovo-bought company has sent out invitations for an event in London hinting that it will introduce a smartphone "made to last" and "priced for all."

On April 19, we heard rumors of a lower-spec Moto G called the Moto E that could come at an even more affordable price. This low-cost handset has been rumored to house a 4.3-inch display, 1.2GHz dual-core processor, 1GB RAM, 5-megapixel camera and Android Kitkat 4.4.3.

To help keep costs down, the handset will also supposedly only come with 4GB of internal storage, a 1,900mAh battery - and like the Moto G - 3G-only connectivity.

Alternatively, with Motorola suggesting that this will be a handset made to last, this yet-to-be-announced device could be a ruggedized smartphone. Given the recent trend of waterproof handsets with the Samsung Galaxy S5 and the Sony Xperia Z2, Motorola may be looking to broker its own hardy handset.

Recently there have been early reports of a new Moto X+1, the follow-up to Motorola's customizable flagship phone.

The Moto X+1 branding first showed up at the beginning of April and five days ago a new benchmark spilled the beans on almost all of its specs.

It'll be interesting to see what kind of handset Motorola reveals given these rumored forks in the road. Who knows, maybe Motorola will reveal two phones at once. Whatever happens, stay tuned to this space as we bring you all the developments on May 13.