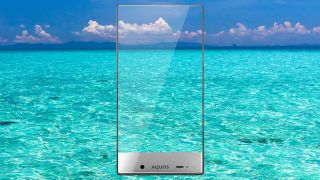 Update: And it's official - the bezel-bare Sharp Aquos Crystal is breaking out of Japan, but it's only headed to the US for now.

The guts of this smartphone might be mid range but it's the almost totally bezel-less display that's got people talking. Sharp's 5-inch panel comes in at 720p and looks pretty darn stunning.

Aligning with previously-spilled specs, the phone is confirmed to come with a 1.2GHz Qualcomm Snapdragon 400 CPU, 1.5GB of RAM, 8GB of storage. Then there's an 8MP rear camera and a 1.2MP snapper on the front.

The phone is heading to US network Sprint, along with its Boost Mobile and Virgin brands, it was confirmed in a press announcement, but there's been no word on a UK or wider release yet.

The US release date is also unconfirmed right now, but the phone will be hitting Japan on August 29.

Pre-paid networks Boost and Virgin will sell the Android 4.4.2 machine for $149.99. On Sprint Easy Pay, customers can get by with $0 down and 24 monthly payments of $10. Virgin will carry the handset in black, Boost in white and both colors will be available at Sprint.

Sharp is best known for producing household goods like great-looking TVs and ultra-efficient microwaves. After conquering home appliances, Sharp's next move looks to be turning itself into a global smartphone maker of note.

The Japanese electronics firm has announced two new Aquos Crystal smartphones including one that is making its way stateside via Sprint.

While the Aquos Crystal's name might sound sparkly, it has a 5-inch display with a so-so 1280 x 720 resolution.

The most impressive feature about the phone is its sharp and thin rectangular design with almost no bezel around the screen. Thinner bezels not only look better, they also make it easier to hold handsets with massive screens like the LG G3.

The phone otherwise is fairly unremarkable with middling specs starting with yesteryear's 1.2GHz Qualcomm Snapdragon 400 processor, which we've seen on other budget handsets like the Moto G.

It also has 1.5GB of RAM and Android 4.4.2 KitKat running on 8GB of internal storage. Camera-wise users won't find much to email to home about between its 8-megapixel rear shooter or 1.2MP front-facing sensor.

Sprint to the finish

SoftBank will also introduce a larger 5.5-inch Aquos Crystal X in Japan this December. As a slight step up from the Aquos Crystal, Sharp's model X will essentially be the company's phablet device complete with a 1080p screen, newer 2.3GHz Snapdragon 801 processor and 13MP camera.

There's no word on if or when the Aquos Crystal X might come to the US, but it looks like yet another Asian smartphone maker is hoping to join the fray alongside Samsung, LG and lesser-knowns like Huawei.