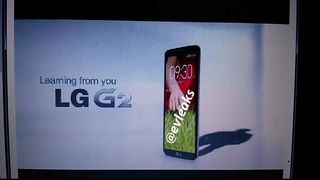 Haven't you heard? Back is the new front

The LG Optimus G2 hasn't been kept under wraps particularly well, and a quartet of new images appear to further enhance its chances of becoming reality.

These latest photos comes courtesy of @evleaks who received them from an anonymous tipster.

While we can't be sure of the source's credentials the people over at @evleaks seem pretty confident they're legit, and apart from showing a slender device with a relatively large screen, there's something interesting going on round back.

On the rear of the Optimus G2 appears to be two buttons just below the camera lens, one with a plus and one with a minus on - with possibly the LED flash sandwiched in between.

The blurry shots seem to suggest that this is a new location for the volume rocker switch, which is a potentially more convenient place to have it - although that's very much up for debate.

According to previous rumours the LG Optimus G2 will pack a 5-inch, full HD display, 2.3GHz quad-core processor, 2GB of RAM and 13MP camera which will really see it take the fight to the Samsung Galaxy S4 and HTC One.

In terms of a LG Optimus G2 release date the Korean firm is expected to announce the handset on August 7 at an event it has planned in New York.