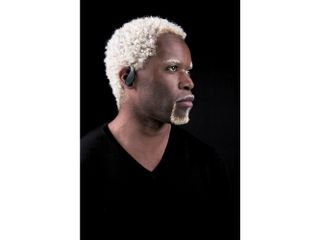 Jabra has announced its latest premium Bluetooth headset - the Stone - with minimalist design and a 'new approach' to design and storage.

The teaser was unveiled a few weeks ago for the new device, which we're pretty sure had hundreds of people weeping with excitement and anticipation of what Jabra could be bringing to the market.

As the name suggests, the Stone is moulded into a pebble-like plastic charging case, and automatically connects to a phone when taken out for use.

Jabra has put Noise Blackout Extreme technology to the Stone as well, which it tells TechRadar will bring 12db more noise cancellation when on a conversation.

We had a play with the new Stone, and it is certainly tiny, with a touch sensitive zone for volume control and call activation.

The battery life is rated at two hours for the headset, with a further six in the stone charging / carrying case, charged by microUSB.

It's actually quite impressive when you consider the Stone only weighs seven grams and has dimensions of 58 x 50.7 x 24.7mm.

We were pretty impressed with it in quick tests - especially as it looks more like a headphone than a Bluetooth headset, as it doesn't have a long boom to pick up voice.

It's now available now, priced at £99, with The Carphone Warehouse the exclusive retailer for the new headset.