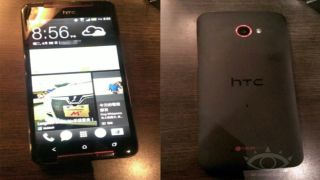 The Flap of a Butterfly's Wings etc etc

It looks like the HTC Butterfly is about to become very real, and some leaked candid snaps show the new specimen giving the camera an early teaser.

The dimensions of the new handset appear to be then same as the original Butterfly, however the speaker on the rear has become stereo speakers on the front.

HTC's BoomSound feature, as it's known, first appeared on the HTC One, and later on the Desire 600. The leak appears to show that the phone is keeping the 5-inch 1080p display, and that Sense 5 will also be showing itself again.

It was VR-Zone that spotted the new handset. We don't know many other specifics of the device, though it's rumoured to be running on a Qualcomm Snapdragon 600 processor.

The camera is expected to use the One's UltraPixel technology too, but there's nothing in the pictures to tell us if this is a sure thing.

We expect to hear the official word on the Butterfly S from HTC on June 19, when the Taiwanese company is holding a special media event, so hold tight.