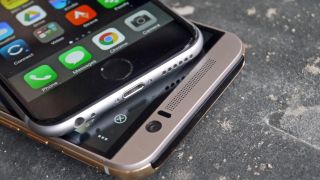 Future phones could be liquid cooled

Smartphones are becoming ever more powerful, but all that power is stuck in a pretty confined space generating quite a lot of heat.

Overheating phones aren't a huge problem right now, but most of us have probably experienced times when our handsets have got uncomfortably hot, which can be bad for the components as well as making them less pleasant to hold..

Conventionally conductive sheets of metal or graphite are used to manage heat in phones, but according to Fujitsu they've reached their limit, so a better solution is needed, especially amid concerns that the new Snapdragon 810 is prone to overheating.

Time to cool down

Thankfully Fujitsu has also provided an answer in the form of a 'loop heat pipe', which is a tiny device full of liquid coolant. The coolant is evaporated by the heat and the energy required to do that is in turn taken away from the heat source, cooling your smartphone down.

As the heat from the heat source powers the system it also doesn't increase overall energy consumption, so it shouldn't affect battery life.

It sounds pretty good. Of course manufacturers will have to implement it into their devices first, so you can't make use of it on any current phones, but most current handsets manage to stay cool for the most part.

As smartphones become increasingly powerful though this or something like it could become a vital component. In fact, based on Fujitsu's current plans, you can expect to start finding 'loop heat pipes' in handsets from 2017.