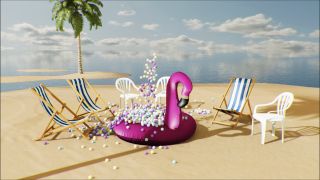 Nvidia has revealed its next-gen PhysX 5.0 which will be available in 2020 (coming ‘soon’, so presumably early on in the year), and the headline feature of the fancy new physics effects incorporated is the Finite Element Model (FEM).

If that sounds familiar, that’s because AMD just unveiled its own FEM solution, a multithreaded CPU library which is a physics method for simulating deformation, and implementing all sorts of fancy bending, shattering or melting effects in graphics for games.

Nvidia’s initial announcement of FEM simply notes that this is an industry-standard technique for simulating deformation effects, and that: “It is used extensively in the automotive and manufacturing industries to accurately simulate the structural strength of both rigid and soft assemblies. It will be built into PhysX 5.0.”

Those were the only details we were provided with, although we did get a video of a beach scene to illustrate some of the realistic physics pertaining to a deckchair, and an inflatable flamingo. Not very exciting, it has to be said, but the effects themselves do look highly realistic, as you would hope.

AMD went into considerably more depth about the sort of effects which can be achieved with its FEMFX – and had some much more explosive demo footage, with gunplay and doors being blown to smithereens – plus it touched on the fact that this isn’t just about spectacular visuals, but that sophisticated physics could also be incorporated into puzzles within games.

Of course, Nvidia’s solution will be capable of delivering the same, and naturally the company will be trying to outdo AMD with its implementation in one respect or another.

After all, that’s what competitors do, and it’s interesting that the announcement of Nvidia’s PhysX 5.0 has come so soon after AMD’s reveal – or perhaps vice versa in terms of thunder stealing, given that AMD knew Nvidia’s big GTC 2019 conference was coming (where yesterday, ray tracing support was announced for six new games, including a popular battle royale, incidentally).

Nvidia highlighted two other main facets of PhysX 5.0, including improved physics for liquids, with game developers “able to use discrete particle simulations to model fluids and granular flow”.

PhysX 5.0 will use a Discrete Element Model (DEM) for modeling friction and adhesion, and an implementation of Smoothed Particle Hydrodynamics (SPH) for simulation of liquids with discrete particles, which, Nvidia informs us, is a technique used in oceanography and volcanography.

Finally, the new version of PhysX will boast a constrained particle model for all manner of fancy effects pertaining to cloth (like that deckchair fabric) or rope, inflatable shapes and more.

There’s lots of advanced functionality for making physics in games better, in short, and Nvidia is promising more details will be revealed about the system as we get closer to the launch of the PhysX SDK 5.0. As mentioned, hopefully that won’t be far into 2020.

Much like AMD’s FEMFX, these sort of effects will doubtless make good use of many-core processors, the likes of which are far more common these days given how hard Ryzen CPUs are driving with core counts (with Intel following to some extent).

At this point, if you’re thinking: wait a minute, isn’t PhysX about GPUs and only supported in certain games?

In actual fact, PhysX is a broader thing these days, and it’s implemented (at least in CPU-based form, which was open-sourced some four years back) across the games industry, for example being the core part of the underlying physics engine of Unreal Engine 4. GPU accelerated implementations (not open source) for specific games fell out of favor some time ago…

At any rate, the clear message for the future is that much better physics are coming to games one way or another – which has to be good news.