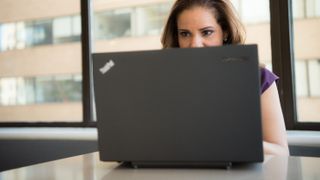 Lenovo could be preparing to launch a new line of ThinkBook laptops aimed at consumers according to Notebook Italia who discovered two of the company's laptops with unusual names at a trade show in China.

Currently the Chinese hardware maker sells its business notebooks under the ThinkPad brand while its consumer models are under the IdeaPad and Yoga names but that could be about to change.

The Lenovo ThinkBook S laptops come in 13-inch and 14-inch size and the new devices could be coming to Europe at the end of May for around €1,000 according to several listings from online stores.

As of now though, it remains unclear as to whether or not these new models will be coming to the US.

Lenovo's new line of laptops appear to be positioned as replacements for previous generation IdeaPad devices but, according to Notebook Italia, the ThinkBook S models sport new designs featuring slim bezels, metal bodies and a 180 degree hinge which allows their screens to fold flat against a table.

Both the 13 and 14-inch models have 1080p resolution displays though the smaller device is brighter than its larger counterpart at 300 nits compared to 250 nits. The laptops also feature 720p webcams with a built-in privacy shutter.

The new ThinkBook S laptops are expected to ship with Intel Core i7 Whiskey Lake processors, up to 16 GB of RAM, up to 512 GB of SSD storage and optional support for AMD Radeon 540X graphics.

Given that Notebook Italia was able to spot these devices at a trade show in Lenovo's home country of China, it is very likely that will learn more about these devices from the company itself and the possibility of a new ThinkBook S line relatively soon.