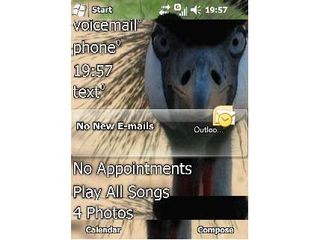 We can't look away... please, someone help us

The unofficial pics of Windows Mobile 6.5 appear to have been real, as yet more shots of the mysterious OS have surfaced today.

First of all, no, we have no idea why the scariest peacock in the world is being used as a background - we can only hope it's a developer joke and not the official mascot for Microsoft's update of the OS.

But the new pictures show the honeycomb interface (looks like it's the real deal) and the menus seem to take a few cues from Microsoft's Zune.

We assume this new OS, which is tipped to be announced at Mobile World Congress in February, will be more touchscreen friendly, releasing its users from menu-tapping hell.

The mobile version of Internet Explorer has also received a refresh it appears, with buttons placed at the bottom of the browser to enable easier access, so WM fans might be a little bit more pleased with the whole experience.

We'll await the new release with bated breath (though we might not be able to keep that up for the entire three weeks' wait), but in the meantime head over to the XDA Developers forum to check out some more pics.