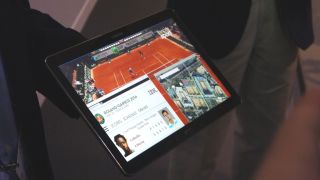 Well look what we have here...

You might not be able to walk into a store and buy a 4K tablet just yet (well apart from Panasonic's crazy 20-inch offering), but we've spotted a 12-inch Samsung prototype.

It was being used by Orange as part of a LTE Broadcast demonstration during the French Open at Roland Garros.

The video stream it was receiving was only 720p, but the Orange representative was able to pull up additional windows over the top, giving us a glimpse at its true clarity.

This is purely a reference device for operators to perform tests with, but the slate in question was sporting Samsung's unmistakable design complete with the physical home key below the 12-inch UltraHD display.

Specs for the prototype tablet weren't available, but TechRadar was told it housed a Snapdragon 801 processor.

The hope is that when such a tablet arrives for the consumer market it'll be sporting the newer Snapdragon 805 chip which comes with many added 4K benefits including video upscaling to make 720p and 1080p clips look much better and a new video format (HEVC) which is less bandwidth heavy.

If the thought of owning a 4K tablet has your appetite whetted, then good news: you won't have too long to wait to get your hands on one.

During a Qualcomm event in Paris the firm's Senior VP of Product Management, Raj Talluri told us that 4K tablets would be with us before the year is out.

There's no guarantee that Samsung will have a 4K tablet in 2014, but things are looking hopeful and with a special tablet event on June 12 in New York, the Korean firm may have something 4K-related to show us very soon.

TechRadar will be reporting live from Samsung's tablet event, so stay tuned to see if any 4K slates do emerge.