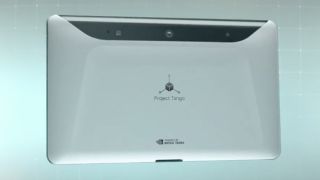 Are you ready to Tango?

Once again proving it takes two to tango, Google's Advanced Technology and Projects (ATAP) team is making developers do the happy dance by announcing tools necessary to create software for a visionary tablet.

ATAP heralded on Google+ that an official software development kit (SDK) for the Project Tango tablet is now available. The slate is a collaboration with Nvidia and is expected to land in developers' hands at Google I/O later this month.

First announced as a Kinect-style smartphone prototype back in February, the 7-inch tablet powered by a Tegra K1 processor is unique in its ability to map 3D motion and depth, courtesy of several onboard sensors.

Available later this month, Google is now accepting sign-ups for the Project Tango Tablet Development Kit, which will cost developers $1,024 (about UK£609, AU$1,098) for the privilege of owning the hardware and software to "make applications that track full three-dimensional motion and capture surfaces in the environment."

Last month, a report claimed Google was readying as many as 4,000 prototype tablets. The devices come packed with 128GB of storage, 4GB of RAM, Wi-Fi, BTLE and 4G LTE as well as a motion tracking camera and integrated depth sensing.

The Project Tango website makes it clear the Tablet Development Kits are not aimed at consumers, but rather developers who Google hopes will help evolve the platform in interesting and unique ways in the future.

"These development kits are designed for professional developers interested in exploring the future of mobile 3D sensing. Developers will receive updates as the software algorithms and APIs evolve," the website revealed.

The tablet is also the only way for developers to pitch in on Project Tango, given that Google has long ago handed out all of the smartphone models produced earlier this year.