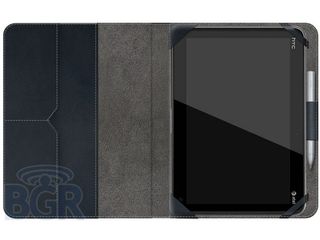 HTC Puccini - all it needs now is a name

New images of the HTC Puccini have been uncovered by the chaps over at BGR, revealing an iPad-esque design for the unannounced 10-inch slate.

Unfortunately, the crisp, clear renders didn't come with a host of confirmed specifications, but they do show an 8MP rear-mounted camera with dual LED flash.

The back panel features a snazzy mesh design, along with a speaker grille.

The front side is shown in a folio-style case, with a special holder for the HTC's "magic pen" – also known as a stylus.

The HTC Puccini is also rumoured to be running Honeycomb (although it's anyone's guess as to whether it will be Android 3.0, 3.1 or 3.2) and rocking a 1.5GHz processor.

With the codenamed HTC Puccini having passed through the necessary federal testing last week, we imagine that HTC is gearing up to launch the tablet some time in the near future.

Hold on to your hats, folks – this one's a dead cert.