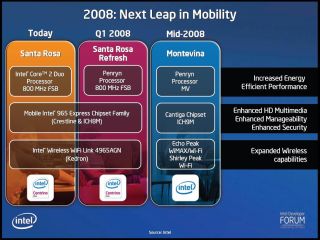 Intel has dished further details of its upcoming Montevina Centrino mobile platform on day two of the IDF tech fair. 45nm CPUs and WiMAX wireless are among Montevina's tastiest titbits, due out in mid 2008.

Needless to say, at the very heart of Montevina will be a mobile variant of Intel's upcoming 45nm Penryn processor in both dual and quad-core trim. Intel's mobile mastermind David Perlmutter did not divulge clockspeeds or release detailed performance figures.

However, Perlmutter did reveal that the standard, rather than low-voltage, variants of mobile Penryn would be available in a 25 watt trim. That's a reduction of 10 watts compared with existing Intel Core 2 Duo mobile CPUs.

As well as improving power consumption, Montevina brings a 60 per cent reduction in chipset and motherboard physical dimensions. That should enable smaller, thinner laptops without compromising performance.

Other highlights include integrated support for both HD DVD and Blu-ray video disks and upgraded security features.

Taking wireless to the WiMAX

Arguably Montevina's sexiest specification is optional WiMAX wireless networking. Or at least it would be if there were any firm plans for rolling out widespread WiMAX networks inEurope.

WiMAX is a broadband wireless networking technology designed to combine the long-range, wide-area abilities of conventional cellular services with the multi-megabit data bandwidth of Wi-Fi networking.

A number of telecommunications carriers in North America and Japan have committed to installing WiMAX networks. For now, issues including radio spectrum licensing and the heavy investment mobile carriers have made in 3G networks are discouraging the adoption of WiMAX in Europe.