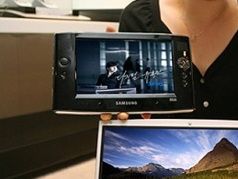 The Q1 SSD was launched in Korea last year

The Flash memory version of the Samsung Q1 Ultra Mobile PC is to make its UK debut in May.

Released last year in Korea, Q1 SSD is the first of its kind to eschew a traditional mechanical drive in favour of a 32GB solid state drive. Boot times are 25 to 50 per cent faster than with traditional drives while reading and writing is phenomenally improved.

By employing Flash-based media, the new UMPC will be ideal for applications where traditional drives might have a large failure rate - in industry, for example, or where information needs to be very quickly accessed.

"What began as a collaborative project among Samsung, Microsoft and Intel has continued to flourish and evolve," enthuses Bret Berg, Senior Product Marketing Manager, Mobile Computing Products at Samsung.

"Use of the solid state flash memory-based hard drive allows the Q1 UMPC to be used in applications... where the adverse environmental conditions make use of a rotational hard disk drive-based system impractical."

The new model is available in the US for $1,999, a markup of $700 on the standard model. UK pricing has yet to be confirmed.