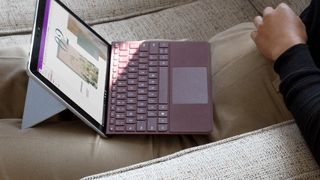 Microsoft’s latest financial results are in, with the company claiming a record quarter. There's been bumper revenues driven by growth in its cloud services – but Surface hardware was also a highlight, with the devices gathering momentum nicely.

As The Verge reports, Amy Hood, who is Chief Financial Officer at Microsoft, noted on a call with investors that much of this Surface revenue had been driven by the Surface Go and Surface Book 2.

It’s interesting that the latter should be mentioned, as from what we’ve seen in the past – certainly with the original Surface Book – this has been more of a niche product (given its eye-watering price tag that starts at $1,499/£1,499, or AU$2,730, and that’s for the smaller 13.5-inch spin).

So we’re betting it’s the Surface Go 10-inch tablet which is the primary force behind the steadily swelling coffers, with its far more affordable starting price of $399 (£379, AU$599).

At any rate, the overall Surface range is currently doing well – despite having hit rocky patches in the past – although this shouldn’t be a surprise, given that Gartner recently revealed that Microsoft has just become one of the top five PC vendors in the US market for the first time ever (ahead of Acer and Asus).

More in the pipeline

Also, these Q1 figures represent sales up to and including the month of September, so bear in mind that Microsoft subsequently unleashed a whole host of Surface products when October’s press event rolled around.

That included the launch of the Surface Pro 6 and Surface Laptop 2, as well as the Surface Studio 2 all-in-one PC sequel, and some fresh Surface Headphones to boot, all of which should help to push sales further in the next quarter.

On the gaming front, Xbox hardware revenue stormed to 94% growth, and the number of active users on Xbox Live has now reached 57 million. Plus as we saw earlier today, Microsoft announced that it’s bringing the Xbox Game Pass subscription service to PCs, an exciting development for cross-platform goodness.

The top earning division of the company was the More Personal Computing unit – that includes Surface, Windows, gaming and search – which raked in $10.7 billion (£8.3 billion, AU$15.1 billion) and was up 15%.