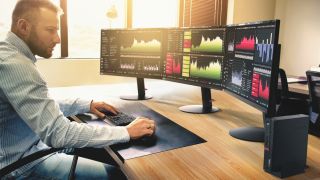 Lenovo has kicked off a new PC as a Service (PCaaS) offering which lets business users ‘rent’ computers on a monthly subscription basis, rather than having to pay a large lump sum to purchase machines outright, with the company also unveiling a new incredibly compact ThinkStation PC.

Lenovo’s PC as a Service scheme lets buyers combine paying for computer hardware and other services into one fixed monthly subscription, for a more streamlined process which also includes management of said PCs.

As with all such offerings, the idea is to take away the major financial sting of having to pay for everything upfront, and to make upgrading in the future a less painful endeavour.

Businesses will be able to use the service with not just desktop PCs and workstations, but also laptops and tablets, and as mentioned other software and services can all be rolled into the contract for maximum convenience.

The scheme covers everything from configuration of the selected PCs through to disposal procedures which are compliant with regulations and designed to keep corporate data safe.

Both HP and Microsoft already offer similar initiatives, and last month Dell announced that it will kick-off its own PC as a Service subscription plans before the end of the year.

Meanwhile, Lenovo also unveiled the new ThinkStation P320 Tiny, which as you might guess from the name is a very small workstation PC. In fact, the company claims that it’s the smallest ISV-certified workstation on the market, able to fit on your desk no matter how tight the space.

When it comes to the operating system, you can plump for Windows 10 or stick with Windows 7, or for those who wish to go the non-Microsoft route, Linux is an option.