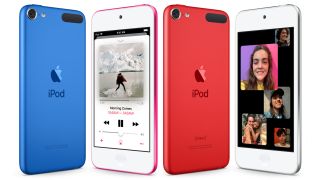 Apple has announced a brand new version of the iPod touch, marking the first upgrade to the classic music and video player since 2015.

The new iPod touch 7th generation is said to come with "enhancements to power, capability and communication", according to an Apple press release. These new capabilities are are headlined by Apple's A10 Fusion chip, which was first released along with the iPhone 7 in 2016. It's not the newest chipset from the company, but an upgrade over the last iPod's iPhone 6-era internals.

Design-wise, it looks nearly identical to the old iPod touch with a four-inch display and lightweight build. Apple says that the new model is available to buy in six finishes, including "space grey, white, gold, blue, pink and red".

The inclusion of Apple's A10 Fusion chip means that the new iPod touch is optimized for gaming, including what Apple calls, "immersive augmented reality (AR) experiences".

Apple says that the new iPod touch provides "fun and productive AR experiences across gaming, education and web browsing", with experiences made even more immersive with the "new capabilities of shared AR, persistent AR, which is tied to a specific location, and image detection", which makes it possible for the new iPod touch to "magically bring to life 3D objects like toys and sculptures."

The release of the new iPod touch has come just in time for the launch of the company's new gaming service, Apple Arcade, this Fall (between September and November 2019).

The new mobile and Mac gaming subscription service will bring the best of the App Store, which is already the world's largest gaming platform, according to Apple. It'll have a month fee attached to it, like Apple Music and Apple News+.

Apple says that the service will come with "over 100 new and exclusive games with no ads or additional purchases, and the ability to download games for offline play" – and it seems that the company is setting up the new iPod touch as a (relatively inexpensive) way to get access to it.

After all, even the relatively dated iPhone 7 currently costs $449 / £449 / AU$749, and if you don't already have an Apple device, this is a lot of money to pay to access the Apple Arcade – and pricing for Arcade alone is still TBC.

The new iPod touch also provides fun and productive AR experiences across gaming, education and web browsing. AR is even more engaging and immersive with the new capabilities of shared AR, persistent AR, which is tied to a specific location, and image detection, making it possible for the new iPod touch to magically bring to life 3D objects like toys and sculptures.

The A10 Fusion chip also means that users can access Group FaceTime, making it "easy to chat with family members, friends or colleagues simultaneously".

At its heart, the iPod touch is still a music player...we think. With the option to go up to as much as 256GB of storage, there's plenty of space to download music for offline listening, whether you get it from the iTunes Store or Apple's streaming platform, Apple Music.

Subscribers to Apple Music can access a catalogue of "over 50 million songs, thousands of playlists, Beats 1 Radio, and daily editorial selections", according to Apple. Best of all, we're happy to report that it includes a 3.5mm headphone jack.

With such scant mention of music from Apple in relation to this launch, it seems as though the new iPod touch is being squarely positioned as a multimedia player rather than a music player, with a strong focus on gaming.

Whether this, and the promise of Apple Arcade to come, will be enough to entice customers to buy the new iPod touch when smartphones can do all of this (and more) already, remains to be seen.