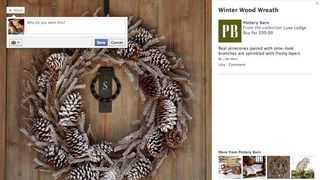 Facebook is imitating what social-networking rival Pinterest does best and is launching a new feature called Collections and the long-promised "Want" button.

At the same time, "liking," "wanting," and "collecting" businesses' products through photo albums is a great counterweight to the site's other recent gift-focused unveiling, Facebook Gifts.

"Collections can be discovered in News Feed," a Facebook spokesperson told TechRadar.

Businesses that spread the word about their products through photo albums will benefit the most from Collections. So far, this new type of Page post is being tested with retailers Pottery Barn, Wayfair, Victoria's Secret, Michael Kors, Neiman Marcus, Smith Optics, and Fab.com.

Facebook doesn't "want" anything in return from brands using Collections. At this time, there's no referral fee when users are sent offsite through a link to purchase a product - but that could always be implemented in the future.

Also a possibility for the future is an offsite social plugin. Facebook told TechRadar that "this is not a social plugin and is not available offsite at this time." (emphasis added).

Facebook refers to Collections as a new way for businesses to communicate with customers. But the envious growth of Pinterest, especially with its 80 percent women userbase, has obviously been the major influence.

Facebook isn't alone. Apple reportedly showed an interest in buying The Fancy, a Pinterest rival that describes itself as "part store, blog, magazine and wishlist."

Pinning its hopes on developing Collections internally, Facebook is rolling out the new feature in a big way: the ability to "like," "want," and "collect" is available to everyone right now.