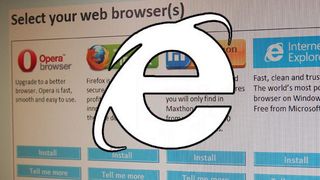 Available to Windows 8.1 and Windows 7 SP1

Internet Explorer is hardly a browser we ever would call cutting edge but Microsoft is trying to open its web platform by launching a channel for web developers and regular internet surfers.

The Developer Channel release is a fully functional version of Internet Explorer that's designed for web developers to get a sneak peek at the web platform features Microsoft is working on.

Although the release is mainly targeted for devs, any curious early adopters can also download the preview release if they are running either Windows 8.1 or Windows 7 Service Pack 1.

What's more the Developer Channel browser can run alongside and independently of IE11 letting everyone try out all of Microsoft's latest platform features and return to a stable browser when things don't quite click.

As an experimental release of Internet Explorer, the Developer Channel will let users tap into a few new features including using their Xbox 360 controller to play web games.

Microsoft writes that users will be able to connect their controllers to play Atari Arcade games and try Hover.IE. There's no word if Farmville will be supported but Xbox 360 gamepads will work with Microsoft's hilariously self-made Escape from XP, a side-scrolling malware shooter.

In the future Microsoft promises this will be the first of many Developer Channel releases as it plans to roll out more updates down the line.

Other browsers including Chrome, Firefox and Opera have all had preview build and while Microsoft is playing catch up in this regard, the Developer Channel is a good first step for the Redmond company.