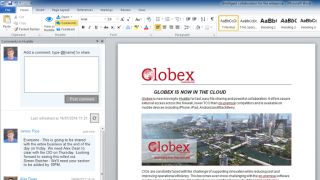 One less reason to duck out of the Huddle

Cloud-based collaboration company Huddle rolled out note-taking functionality for its users back in December 2013, describing Huddle Note as an "alternative to Microsoft Office".

It's now gone the whole hog by integrating a customised version of Microsoft's productivity suite into its platform. Called Huddle for Office, it lets users edit and save Word, Powerpoint and Excel documents directly to the Huddle cloud (via workspaces), removing the need to leave the browser and open up desktop applications. It still provides the ability to save documents locally.

Additionally, users can leave comments and collaborate on documents from desktop, cloud or mobile devices. However, instead of going down the real-time co-authoring route like Microsoft SkyDrive or Google Docs, Huddle tracks changes via its full audit trail for security and compliance purposes, meaning users can access previous file versions.

Alastair Mitchell, CEO at Huddle, told TRPro that Huddle for Office removes the need for businesses to kit out employees with laptops and PCs fitted with large storage drives.

He said: "It removes the need to store files on shared drives as everything is now integrated in Huddle for Office, which was one of the few reasons companies were staying with Sharepoint. It's a dramatic step forward for us, not just for Huddle, but for the integration of the cloud into enterprise workflows."

Huddle for Office is available now as an add-on from the company's website.