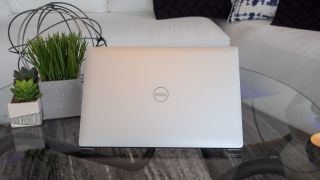 Another Dell patent has emerged which indicates that the firm is working on some kind of a laptop with a foldable display, or in this case, a dual-screen affair – concepts which are more or less the same thing, although their implementation is obviously different.

In the case of using a pair of separate screens – as opposed to a continuous OLED film as highlighted in a previous Dell patent – the key is obviously to make the device’s displays blend together as seamlessly as possible when unfolded, and this fresh patent, spotted by Windows Latest, is for a hinge which aims to do this.

The design proposed is a “narrow width dual axes” hinge (complete with a gear assembly that’s attached to each screen) which would leave “minimal spacing” between the two displays.

Presumably the idea, then, is that this very minimal gap will contribute to the illusion of the device being just a single screen when it’s unfolded flat on a table or other surface.

As noted in the patent, any hinge mechanism has to be robust for reliability ends, and normally this would interfere with the goal of trying to keep the displays as close together and as seamless as possible – but the key is in Dell’s implementation here.

Of course, just because a patent has been filed doesn’t mean Dell actually intends to use this technology – it could just be a concept the company has played around with, which won’t ever be used in an actual product that hits the shelves.

However, the growing weight of evidence certainly suggests Dell has some kind of laptop with a foldable display in the works, and indeed the company has recently indicated this is the case – although there are still problems to be solved with the execution of such a device.

So, this particular hinge mechanism might just be part of the puzzle of a broader foldable solution.

Rival laptop maker Lenovo already has a ThinkPad X1 tablet with a foldable OLED 2K display that we’ve had the opportunity to play with.