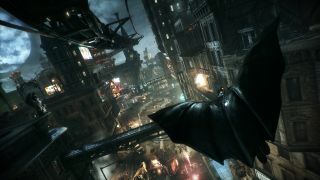 UPDATE: Developer Rocksteady has announced that will be taking the reigns on fixing the problem plagued PC port – more details can be found here.

Following a disastrous launch for the PC version of Batman: Arkham Knight, publisher Warner Bros. has announced that it has suspended sales of the game for that platform until its various problems have been ironed out.

The PC port, which in some ways is out-performed by the PS4 version, was outsourced to Killer Instinct: Season 2 developer Iron Galaxy.

The game's most noticeable problems include a locked down frame rate of 30fps (check out our workaround, though there's no guarantee it will make the game perform any better), stuttering, and the lack of high performance visual effects, such as bokeh depth-of-field, ambient occlusion and transparency layers for rain and wet surfaces.

The night is darkest just before the dawn

In its statement, Warner Bros. told its customers that "if you purchased your copy of the game and are not satisfied with your experience, then we ask for your patience while these issues are resolved."

However, it went on to suggest that people could request a refund of the game on Steam or at the retail store they purchased it from, if so desired.

Batman: Arkham Knight director Sefton Hill tweeted that "WB Games is working with the PC developer Iron Galaxy to address the issues ASAP. Rocksteady will provide any support to get this resolved."

The Steam version of the game has so far received over 6000 negative reviews.