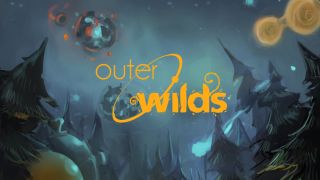 Well, this is new. We've played a lot of incomplete code, but never have we failed to get past the title screen before. Except this is not a bug, and it's no fault of Alex Beachum and Sarah Scialli's, the duo heading up the development of Outer Wilds.

We're to blame. For 20 minutes now, we've been staring at a wisp of smoke rising from a campfire through a copse of trees on a hunk of rock that's spinning through space. A softly plucked banjo phrase builds and builds, then drops away and starts up again. And again. And again. It's perfect.

Happily, what we find when we finally muster the strength to move on is pretty special too. We aren't alone in this opinion: this hitherto-unknown project from a young, hobbyist team caught the eye of the IGF judging group and secured itself nominations for both Excellence In Design and the Seumas McNally Grand Prize, the most coveted award in indie gaming, past winners including titles such as Fez, Minecraft and Papers, Please.

"I was pretty flabbergasted," Beachum tells us. "We submitted [Outer Wilds] last year to the student IGF, and didn't get in. Now, a year later with a slightly different build, we're in multiple categories. It's like, 'Whaaat?'"

It's an appropriate reaction given that Beachum, Outer Wilds' creative director, and Scialli, its producer, are trying to elicit much the same feeling from their game's players. Outer Wilds is, on first inspection, about languidly exploring the half-dozen planets and moons in an alien solar system. We meet a man on a moon who admits he has nothing much to do.

At his instruction, we admire the view from its north pole. We board our craft again and head back into space, spotting another planet off in the distance. We activate the ship's autopilot, which matches our flight path to our destination's trajectory and then accelerates us towards it. Just as we're approaching a planet shrouded in gigantic thorns and dense fog, a white light burns across the screen, obliterating everything.

Has dying ever been this much fun?

A grainy video plays back our adventure in a few seconds and then we're back down on our home planet by the campfire, a few steps away from our ship. We approach a nearby NPC and the first dialogue option sums things up nicely: "Did... Did I just die?'

We did indeed, and we'll die again every 20 minutes on the dot thereafter, the solar system moving faster each time to enable us to reach farther into its depths before the end of the universe. One planet is entirely water; another moon is host to an active volcano, and is gradually shattered by wayward hunks of molten rock. Within 20 minutes, the planet will be destroyed and take its secrets with it.

"I was inspired by the Roguelike," Beachum says. "When you have permadeath, you can play around with consequences, and time- dependent things. You just get to reset the whole thing after a certain point, so you can kind of do whatever you want.

We have all these systems that, in some cases, if we let them run for longer than 20 minutes, there'd be chaos. But with the time loop, we get to create irreversible things that can happen, so that when you explore matters just as much as where. But then we get to reset it, set back the clock, and everything's functional again."

Roasting marshmallows under an exploding sun

The result is a delightfully shifting pace. Relaxed exploration yields information that gives rise to a mad dash to new discoveries, such as fellow adventurers, new camp sites, and little strands of knowledge about the ancient civilisation that provides the game's narrative. The physics system presents its own duality.

You'll encounter gravity that pulls your ship off a seemingly safe footing on a crumbling planet's crust or discover that the rapidly twirling solar system can see your auto-piloted trip to a far-flung planet interrupted by the sun, and yet whether you're plunging head-first into a ball of nuclear fusion, taking floaty leaps across a moon's surface or watching the universe melt before you, there is a constant sense of peace.

"Early on, we had a prototype where you sat roasting marshmallows while the sun exploded around you," Scialli says. "That's the feeling of the entire game, right? That feeling of being out under the stars while everything chaotic is swirling around you, [yet] you're comfortable, enjoying this silence and peace around you."

You can still toast marshmallows if you want, though it means missing out on a galaxy's worth of discoveries – at least until time runs out, everything burns white and, like that banjo lick on the title screen, you loop back to the start.