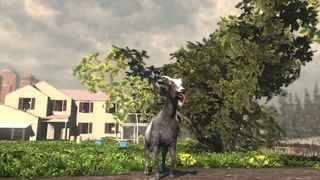 Sony's Project Morpheus won't launch until next year, but do you think that's stopping PlayStation developers from implementing virtual reality in their games right now? Of course not - Coffee Stains Studios laughs in your face.

The Goat Simulator creator has announced it's bringing its game over to PS4 and PS3 on August 11, with all the glitches and irreverent humour intact. So far, so expected - but what's this? It's also announcing something called GoatVR which doesn't require Morpheus to work.

"We've been working on GoatVR for some time, and we're pleased to debut it in the PlayStation editions of Goat Simulator," said the studio in blog post. "GoatVR is the most authentic 'simulated GoatVR experience' that doesn't require a helmet or anything."

"We still need to do that part where it connects to an actual headset but for now you can enjoy a simulated GoatVR experience without it."

We weren't entirely sure what that meant (we assume some sort of first-person mode), so we contacted Coffee Stains for clarification. Lead Designer Oscar Jilsén responded with an answer that only served to confuse us further.

"Like almost all game developers we've been having some pretty intense discussions about the merit and future of VR," said Jilsén. "We feel that even thought the technology is cool and can add to a lot of games the technology just isn't there yet. So going into this our approach has been to make the most authentic VR simulation experience possible with as little hassle to the user as we can.

"That is why we've focused on getting that tight VR simulation experience without the actual headset. It's going really well and if we continue with the breakthroughs we don't even think we'll have to do all the VR headset stuff to get the genuine experience."

And here's the kicker: "The experience is so close to actually having a headset on that we expect a lot of players to instinctively reach to remove the headset after a game session, even though they never put one on in the first place!"