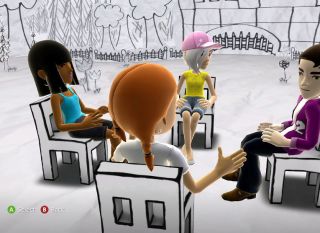 Microsoft has launched Avatar Kinect - the latest addition to its Kinect Fun Labs on Xbox Live.

The Kinect has proven to be a massive hit for Microsoft, and Avatar Kinect picked up plenty of attention when it was shown off at CES.

Microosft describes Avatar Kinect as a 'new social entertainment that brings your avatar to life' - and presumably goes a very, very tiny way to justifying the actual real money spent by some in decking out their Avatar.

"Avatar Kinect captures your facial expressions and voice so when you smile, nod or speak, your avatar does the same," explains Microsoft.

"Invite up to seven friends to join you in 24 imaginative virtual stages – discuss the latest celebrity gossip or news on the Talk Show Stage, try out your hysterical comedy routine on the Performance Stage, or wager who will win the big game in the Sports Party Stage," it adds.

It's basically a chat room for the 21st century, and is available Xbox Live Gold subscribers, although a trial until 8 September means that everyone can have a go.

Oh, and just in case that's not enough scintillation for you, Kinect Sparkler launches this week - we'd explain what that is but we reckon you'll work it out fairly quickly yourself.

You can check out what we want in the next Xbox - be it the Xbox 720 or Nextbox - in our exclusive video below: