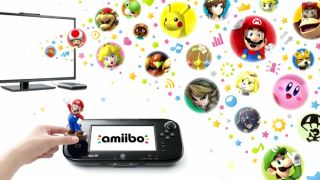 They're similar to Skylanders, and seem to be Nintendo's answer to the popular gaming statuettes. In fact, Nintendo of America President Reggie Fils-Aime said Amiibo follows in the trend of Skylanders, so there you have it.

Fils-Aime announced the Amiibo holding a Mario version, and Nintendo plans to create different Amiibo for varying characters, games and series. Look for your favorite Nintendo characters - from Link to Princess Peach - to be Amiibo-ized.

Amiibo support will first on the Wii U, specifically for Smash Brothers on Wii U. The game is due in the holidays, along with the first Amiibo series.

Nintendo also plans to release a peripheral next year that lets players use their Amiibos with the 3DS.

What Amiibo can do for you

Special chips in the figures let character data download into the gaming system when they're touched to the gamepad, but that's not all. It's a two-way street, so as you play, your character evolves. Extra power and prowess is added to your figurine. The next time you play with your Amiibo, it's better than before.

In a video post-Digital Event, Bill Trinen, senior product marketing manager of Nintendo of America, explained that battling in Super Smash Bros. for Wii U will help level-up your Amiibo as well as increase its attack and defense powers. It can also learn tactics to become stronger opponents, Trinen said.

Trinen noted that even if you and a friend both own a Link Amiibo, they can be vastly different because players can train and customize their special moves.

"You get to breathe new life into each figure as you watch them evolve and witness their personality take shape," Trinen said.

Nintendo says it's up to developers how they want to integrate Amiibo into their games, so Amiibo is more flexible than the hard plastic bodies would have you believe.