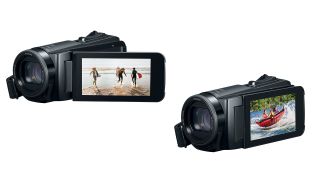 Canon may be best known for making some of the best DSLR cameras and the EOS R full-frame mirrorless snapper, but the Japanese camera manufacturer is also expanding its Vixia range of camcorders.

The company has taken advantage of the popularity of CES 2019 to announce the launch of three new Vixia camcorders, the most notable of which is the first 4K shooter in the G-series line-up.

The Vixia HF W11 and W10, on the other hand, are rugged camcorders that anyone can take along on the most harrowing journey, with both featuring shockproof and waterproof bodies.

The G50 can also capture slow or fast motion at speeds from 0.4x to 1,200x. To keep this kind of creativity steady is a built-in five-axis image stabilization (IS) system alongside Canon’s excellent Dual Pixel CMOS autofocus technology.

Canon is set to launch the Vixia HF G50 in April this year with an estimated retail value of $1,099 in the US (around £859/AU$1,538). Pricing information for other markets is yet to be announced.

Come rain or shine… or snow

For the adventure seekers and the not-so-adventurous Canon has developed the very rugged Vixia HF W11 and W10. They’re both traditional camcorders encased within waterproof, shockproof, and dustproof bodies.

They can both be immersed in water up to 5m and can withstand temperatures down to -10C / 14F.

The only features differentiating the two models are on-board storage capacity – the W11 has 32GB, while the W10 only has 8GB – and a built-in LED light on the W11 that's absent from the W10.

Both feature a SD card slot as well, in case storage needs to be expanded.