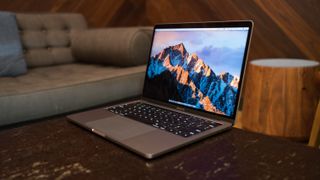 Back in February, we first reported that Apple is considering a 16-inch MacBook Pro with a totally new design, and while a more recent rumor suggested that it might not arrive until 2020 (or 2021), yet another piece of speculation has cropped up which believes it actually will ship this year, as reported by Forbes.

According to the London-based market analysts at IHS Markit, Apple is readying its 16-inch MacBook Pro for reveal at an event in September, which is traditionally the time of year when the Cupertino company unveils its latest iPhone range.

"We foresee that Apple will release a new product [at the] Sep’19 Apple event if there’s no unexpected development issue," said Jeff Lin, Associate Director of Consumer Electronics at IHS Markit.

While we reported a couple of days ago that Apple could be plotting to switch to OLED for its tablet and laptop displays, the specifications detailed by IHS Markit suggest otherwise, citing a 16-inch TFT-LCD oxide display from LG with a resolution of 3,072 x 1,920.

Of course, all of this should be taken with a grain of salt, as there's no telling how accurate IHS Markit's information is. This isn't the only prognostication that the British analytics outfit has made today – the company also believes a foldable Microsoft Surface with Android app compatibility will arrive in 2020.