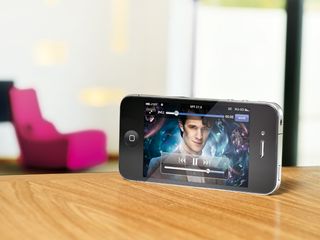 There is a whole host of technology that allows you to watch TV anywhere, but which is best?

A quick search on the web will bring up startling figures about how much time we spend watching TV, and now you can add to that from just about anywhere in the world using your iPhone, iPod touch or iPad.

Doing so is wonderfully easy, but the variety of ways in which you can get live (or indeed catch-up) TV on your iOS device can be a bit bewildering at first, so we spent many hours trying out lots of the hardware and software you can use. Oh, all right, we watched lots of daytime TV - it's a tough job, but someone's got to do it.

We've focused on ways to watch or record live TV using your iOS device, but that's only part of the story - you may want to catch up on something you missed the previous night or enjoy some of the videos you've got stored on your home PC.

Let's explain a couple of terms we're going to be using. The first is streaming, which is the process of sending live TV over the airwaves to your iPhone, iPad or iPod touch using Wi-Fi or your mobile network. Remember that doing so over your mobile network will eat into your data allowance, and you really need 3G coverage to get a good picture.

The second term is electronic programme guide, or EPG, which is the channel-by-channel list of what's on now and later - like the one you get on your Freeview TV.

Choosing the right setup depends on how much TV you intend to watch and where, so keep that in mind as we explain the options and think about which fits your needs.

The first hardware maker we're going to look at is Elgato, which produces a range of TV-related kit.

At the cheaper end, there's the £51 EyeTV DTT or £65 EyeTV DTT Deluxe, which are USB dongles that plug into your computer and TV aerial and can stream to your iOS device.

At the other end of the spectrum is the £180 Netstream DTT, which plugs into your router and TV aerial to stream live Freeview TV over your home network.

The company also makes the EyeTV Sat, but this only work with free-to-air services such as Freesat, not Sky. Virgin Media cabled TV and Freeview HD don't work with Elgato gear either.

To get the USB tuners to stream live or recorded TV to your iPhone or iPad, you need the £2.99 EyeTV app. Elgato will also tell you that you need a Mac, and it must be running and connected to your network.

This isn't strictly true, because if you install the free Orb system on your Windows PC and the OrbLive app on the iPhone, iPod touch or iPad (£5.99), you can stream live TV from an Elgato tuner in your PC to your iPhone over Wi-Fi or 3G.

The OrbLive app also enables you to record TV at the touch of a button, but there are drawbacks. Your PC needs to be on, the Orb software must be running, there's no EPG and on the iPhone and iPod touch, you can only watch in portrait orientation.

To get started, go to www.orb.com to sign up. Once you've installed Orb on your PC, you'll probably need to restart to detect your USB Elgato TV tuner. If you do have a Mac, the Elgato EyeTV software gives you full EPG and recording functionality on your iOS device while you're on your home network.

Out and about, you can use the free My EyeTV service to connect to the Elgato tuner on your Mac at home and watch live TV that way, though your router settings may need some tweaking. And remember - picture quality outside of your home network will depend on your broadband's upload bandwidth - with 1Mbps up, it isn't brilliant but is perfectly watchable.

The Netstream DTT sends live TV over your home Wi-Fi network without the need for your computer - all you need is the EyeTV app on your iOS device. The great thing about the Netstream DTT is its dual tuner, so two people can watch different shows at the same time, or you can record one channel and watch another (if your Mac's on).

You'll need an aerial cable splitter to keep your regular TV plugged in, because the Netstream DTT can't pass the signal through. Although these networked models can work separately from the computer, there's a caveat.

The Netstream DTT's functionality is limited if you don't use your Mac as a middleman. If you're prepared to leave your Mac running to watch TV on iOS, you get a full EPG and can set programmes to record - both at home and elsewhere. Without the Mac, you get live TV on the latest iOS devices around the house only and little else.

You're probably getting our drift that Elgato gear is designed to be used primarily around the home on your Wi-Fi network, and it's best used in conjunction with a Mac. It's brilliant at what it does and the Mac software is very easy to set up, but to watch TV when you're out and about, you might want to consider other options.

One last point regarding the Elgato kit - think about where it'll go. You get a mini aerial with the product, but depending on how strong the signal is in your area, this may not be enough, meaning you'll need to put the tuner near an aerial socket. The Netstream DTT also needs to plug directly into your router with an Ethernet cable.

Its name might suggest the Slingbox is designed to be flung over your shoulder as you go out, but it actually needs to sit permanently in your front room connected to your TV setup and router.

It's a powerful bit of kit that effectively makes your home TV setup available from anywhere you can get 3G or Wi-Fi reception on your iOS device. It even enables you to watch and control your cable or satellite box from your iOS kit, meaning you can watch any paid-for channels you subscribe to.

One notable difference is that the PRO and PRO HD have a Freeview tuner for use when you're watching TV out and about. This is important, because so long as you've got a second Freeview box for your home TV, you can enjoy live Freeview on your iPhone or iPad without affecting what someone at home's viewing. However, if you start watching TV from your Sky box on your iPhone via the Slingbox, anyone at home will see the same channel as you if they try to watch Sky.

The Slingbox doesn't have its own EPG, but it will feed one through from an external source. Ditto a recording facility - it doesn't have a means to do this itself, but if you've got a personal video recorder (PVR), you can control that from your iOS device through the Slingbox.

And if your TV and router are in different rooms, Sling makes the SlingLink TURBO, which sends the TV signal through the power lines in the walls. It'll set you back around £70, but will mean you don't need to move anything around to be able to stream TV over the internet to your iPhone, iPad or iPod touch.

And drawbacks? The Sling Player iOS app isn't particularly cheap at £17.99, and it's a different version for the iPad and iPhone, meaning you may have to shell out twice.

You can't set up a Slingbox using an iPhone or iPad - you'll need a computer to do this. You may also need to have a fiddle with your router's port forwarding settings to get stuff working, although Sling provides some router-specific help.

And, like the Elgato gear, the limitations of your home broadband's upload ability could hamper the picture quality. But make no mistake, this is a powerful bit of kit that packages up your finely tuned home TV setup and lets you take it anywhere in the world.

The equinux tizi is a standalone, battery-powered digital TV receiver. It picks up Freeview signal, just like your rooftop aerial, and transmits the high-quality picture over Wi-Fi to your iPhone or iPad. This means you don't need mobile reception or to be in range of a Wi-Fi network to watch TV.

The significance of this is that it won't touch your monthly 3G data allowance. When it's fully charged, you'll get a good three hours' use out of it, and it's so small and light that it'll easily slip into your bag or pocket.

Its accompanying app enables you to record TV as well as watch live. At £150, it's on the expensive side, although the app is free.

The drawback - and it's a big one - is that you can't attach an external antenna. In our experience, the little built-in one isn't always enough to pick up signal in areas where a larger, rooftop aerial will. Annoyingly, the only way you can really find out is to get one, try it and then return it if it's no good.

Despite this, the tizi is ideal for watching Freeview TV where mobile reception is poor, if you have an iPod touch or Wi-Fi-only iPad, or if your iPhone's on a low monthly data package. To find out more about the tizi, have a look at our in-depth Equinux Tizi tv review.

Current page: How to watch live TV on your iPad and iPhone