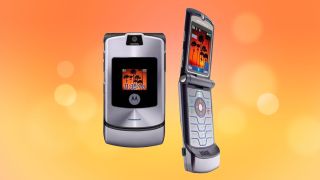 Rumors of a foldable Motorola Razr handset have been building ever since the company's CEO teased TechRadar with details of one back in early 2018, but it may now be finally time for us to see it.

Motorola has invited press in the US to an event in Los Angeles, with a variety of hints that it's planning to unveil the company's first foldable phone.

The invite comes with a GIF that shows the hinge of the Motorola Razr V3 with the tagline 'an original unlike any other'.

When the GIF moves, it seems to peel back and unveil another handset underneath but it's hard to gleam any meaningful information about the phone from this small teaser.

That's not all though, as the invite also states 'you're going to flip', which is a clear reference to the original Razr series being flip phones.

If it all wasn't clear enough, it also says this will be the 'highly anticipated unveiling of a reinvented icon' so we can expect it to sport that Razr name as well when we hear about it next month.

The event is set to take place in Los Angeles on November 13, so it's not long until we'll hear more details about his handset directly from Motorola.