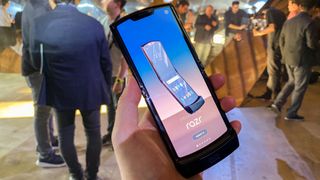 Making foldable phones clearly isn’t easy, as following delays in the launch of the Samsung Galaxy Fold and Huawei Mate X, the Motorola Razr is now following suit – although this time it’s only a relatively short delay.

While pre-orders for the phone are now open in the US, it won’t be delivered until February 18. That’s almost two weeks on from the previous date of February 6, and this new date applies whether you order from Motorola itself or from Verizon (which is the only carrier selling the Razr on contract in the US).

What’s not entirely clear is whether that date also applies to people who have already pre-ordered, or whether this new date is only for new pre-orders – perhaps because Motorola can’t keep up with demand.

If the latter, then that’s actually quite a promising sign that there’s a healthy appetite for foldable phones, though it’s unclear how many units the company has produced.

And it is possible that the Motorola Razr just isn’t quite ready. After all, the company recently launched a number of support videos for the phone, one of which claims that lumps and bumps under the screen are ‘normal’ – a sign that the phone might be lacking a layer of polish.