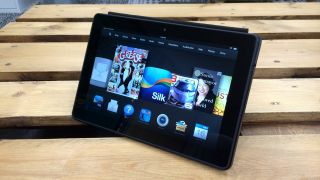 Will the HDX 2 stick to the same size points as the HDX?

Amazon has gone from retail giant to unlikely tech powerhouse, with first the Kindle ereader, then the Kindle Fire tablet and now a whole host of products, such as Prime Instant Video and Fire TV set top box.

Clearly Amazon is serious about making it big in the consumer technology market and the Kindle Fire was one if its early successes, going a long way to popularising the 7-inch tablet market.

Amazon has since brought out a few similarly successful follow-ons, but the most recent two, the Kindle Fire HDX 7 and the Kindle Fire HDX 8.9, were both released back in November 2013. One year on and the company is back with brand-new upgraded version of the HDX 8.9.

It's not called the Kindle Fire HDX 2 but instead simply Amazon Fire HDX 8.9. The company has dropped the "Kindle" branding this time around, keeping it specifically for its ereader products.

The new Fire HDX 8.9 is going head-to-head with the likes of the Apple iPad mini 3 and Google Nexus 9 with Amazon clearly hoping its massive bank of content and exclusive features will give it the edge.

Read on to find out all we know about the new versions.

What will it cost?

Amazon's latest incarnation of the Kindle Fire HDX goes on sale on November 4 for both the Wi-Fi and 4G versions.

The company has confirmed that pricing will start at £329 / $530 for the entry level model, which is to say Wi-Fi only with 16GB of storage.

All the models are already available to pre-order over at Amazon's site and will begin shipping on November 4.

Although Amazon isn't updating its HDX 7 model, it is continuing to provide the tablet at a lower price point than the new HDX 8.9. Prices for that device start at £199 / $321.

Amazon has kept the 8.9-inch form factor for the 2014 update of the Kindle Fire HDX 8.9 while the original 7-inch HDX also remains unchanged.

In fact, Amazon has stuck with Snapdragon, implementing a Qualcomm Snapdragon 805 CPU this time around. Like last year's model, the 805 is a quad-core chip but this time around the speed is upped from 2.2Ghz to 2.5GHz.

Amazon is also touting the graphics performance of the new HDX 8.9, stating it's a 70 per cent improvement over the previous generation. That's a claim we'll put to the test during our full review.