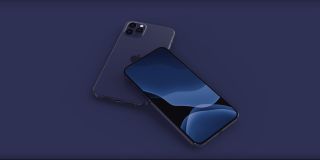 The iPhone 12 lineup could swap out last year’s dark green hue for a navy blue, a new set of leaked images revealed.

The images of a blue iPhone first surfaced in this EverythingApplePro video (below), which credits leaker and XDA Developers writer Max Weinbach for the footage.

Like all leaks, it’s entirely possible this won’t come true, but it’s a reasonable color to pick anyway for the next generation of high-tier iPhone 12 phones - navy is a frequent pick for uniforms and dress clothes, and given the forest green in the iPhone 11 Pro and iPhone 11 Pro Max, we wouldn’t be surprised for a navy hue.

Another question is whether the standard iPhone 12 will get this blue color in its lineup. The budget flagship iPhone 11 had a slate of Spring-themed pastel hues to offer, fitting Apple’s tendency to give its more affordable handsets brighter ‘fun’ colors instead of the classier gold or rose gold.