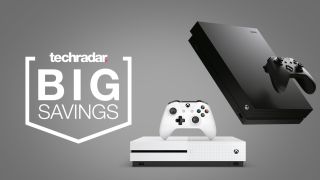 We've all been there. You see fantastic Xbox One bundle deals and wait for them to go just a little cheaper before you snap them up. But before you know it, the seasonal sales come to a halt and Xbox One S and X prices soar back to their usual positions. And then January payday happens, and Microsoft cut their Xbox One X bundle deals back down to that $349.99 sales price once more with Xbox One S deals coming in even cheaper. Wouldn't it be nice if that happened?

Enjoy a whole weekend of cheap gaming with these fantastic Xbox deals offering Xbox one X bundles for just $349 and the ever-cheap Xbox One S All Digital Edition for $149 once more. Plus, look forward to plenty of Xbox One S bundle deals meeting you in the middle with some fantastic discounts.

Those looking to take advantage of the current Game Pass roster or who simply want the cheapest Xbox One deal possible can pick up an All Digital Edition on sale for just $149 this weekend. That low price is courtesy of the fact that this console does not have a disc drive. If you're looking to save on pre-owned physical games or to build up a case collection you'll want to check out the full Xbox One S bundle for a little extra cash.

These Xbox One deals have been sorely missed over the last few weeks as prices have been rising back to their usual retail positions for the New Year. It's never too late to save on a brand new console, however, so these sales could have come at just the right time for a January mood booster.

Not in the US? Scroll down for the latest Xbox One deals in your area.

Xbox One S All Digital Edition | 3x games | $149 at Walmart
Pick up a cheap Xbox One S Digital Edition for a fantastic returning sales price at Walmart this weekend. You're also getting Sea of Thieves, Minecraft, and Forza Horizon 3 to get you set up straight away with some fantastic titles. This console has no disk drive, so if you want to take advantage of cheap pre-owned games, take a look at the Xbox One S deal below.
View Deal

If these cheap Xbox One sales aren't taking your fancy, why not check out our full collection of Xbox bundles. Or, while you're stocking up on Microsoft goodies, you'll want to take a look at these Xbox controller deals and Game Pass prices.