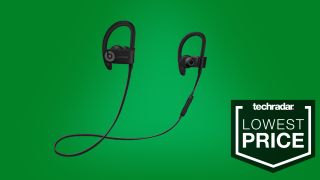 If you're looking to snag a deal on a pair of high-quality headphones, then you're in luck. Amazon is discounting some of Beat's most popular headphones, which include the PowerBeats 3 that are down to a record low price of $79.99. Amazon also has the Powerbeats Pro on sale for $199.95 and the Beats Solo 3 on sale for $199.99.

The Powerbeats 3 deliver a powerful sound with deep bass and clear, dynamic sound. Built for athletes, the wireless earbuds are sweat and water-resistant and feature multiple ear tips for a personalized and comfortable fit. The earbuds provide an impressive 12 hours of battery life and feature an inline remote, which allows you to adjust the volume, skip tracks, and take calls without reaching for your phone.

Shop more of Amazon's best Beats headphone deals below, which include the PowerBeats Pro and the Beats Solo 3 headphones. We don't know how long Amazon will have the headphones on sale, so you should take advantage now before it's too late.

Beats Powerbeats Pro: $199.95 at Amazon
You can snag a $50 discount on the Powerbeats Pro earbuds at Amazon. The truly wireless earphones provide up to nine hours of battery life and are available in your color choice of Black, Ivory, Moss, and Navy.
View Deal

Beats Solo 3 Wireless Headphones: $199.99 at Amazon
The Beats Solo 3 headphones get a $100 price cut at Amazon. The best-selling wireless headphones provide up to 40 hours of battery life and work with Siri for hands-free control.
View Deal

You can also shop more Beats deals with the cheapest Beats headphone prices, sales, and deals.