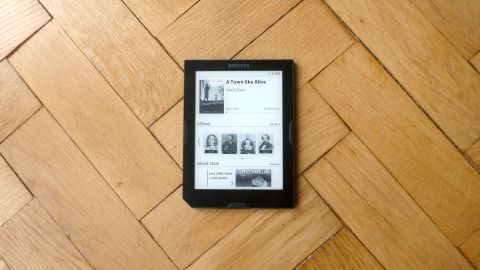 Those after great hardware and out to save some money should look no further than this entry-level, backlit e-ink e-reader.

Anyone who thinks their ereader choice is a straight fight between a Kindle and a few choice products from Kobo should think again. This isn't the first ereader from French company Bookeen, but it is its best value version to date.

The clue to its key feature is in its name; its backlit e-ink screen instantly puts it into the mix with the likes of the Amazon Paperwhite, Amazon Voyage, Kobo Aura H2O and Kobo Aura HD. With an RRP of a mere £80 (US$109, about AU$160), it's really designed to appeal to those after their first ereader while maintaining more premium features.

An ereader with a six-inch screen, the Cybook Muse weighs 190g and measures 155 x 116 x 8mm, which makes it among the lightest around, and one of the easiest ereaders to hold in one hand.

I also found it possible to pocket while wearing jeans, and it fits nicely into the inside pocket of a suit jacket, though only just squeezed into a shirt's chest pocket. It's 17% smaller than its predecessor, the Cybook Odyssey.

Like a tablet, the Cybook Muse has an edge-to-edge glass front that brings a classy look, plus there's no ridged frame liek the one found on the the Kobo Aura HD. However, the downside of the edge-to-edge design is that if you put the Cybook Muse face-down on, say, a bedside table – surely a typical scenario – it could get scratched or scuffed.

Unlike a tablet, the Cybook Muse's built-in battery lasts an entire month. It's arguably more ergonomic than a slate too, with its tapered sides on the rear makes it easy to grasp. It also features a cut-away corner on the bottom-left as you read, which serves no purpose, but looks distinctive.

Physical buttons on the Cybook Muse include a raised page-turner each side of the screen (though since it's also got a multi-point touchscreen, they're not essential) and a hard menu button underneath the screen.

The undercarriage features a microUSB slot for recharging, an on/off switch, and a microSD card slot. The built-in memory is 4GB, which is standard across most ereaders (and enough for a huge 4,000 graphics-light books).

The screen itself is an e-ink Carta HD Display with 16 grey levels, and a resolution of 758 x 1024 pixels that means 213 DPI (dots per inch), which is HD quality without threatening the market leaders; the latest Kindles and Kobos regularly achieve 260-300 DPI.

Somewhat surprisingly for such a cut-price ereader, the Cybook Muse also has a Wi-Fi antenna, and even includes a basic web browser.

However, the most striking aspect is its FrontLight, created by LEDs in conjunction with an invisible laminated light diffusion film to spread the light evenly across the screen.

It's capable of 20 different brightness levels, from eye-searing nonsense to the lowest setting, which is just about perfect for reading in a blackout or in bed at night.

The Cybook Muse is also available without the illumination option, as the Cybook Muse Essential, which costs £59.90 (US$89.90, about AU$116) less.

Bookeen also sells the step-up Cybook Ocean for £149.90 (US$189.90, about AU$244), which increases the size of the screen to eight inches while also claiming the title of 'world's thinnest' ereader at a mere 7mm.