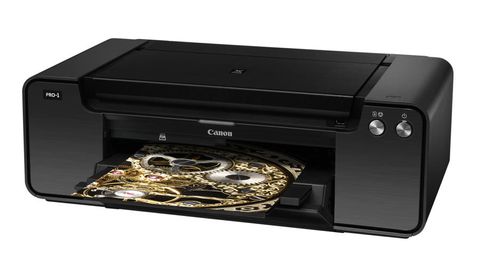 The Canon Pixma Pro-1 A3+ printer stands at the top of Canon's Pixma Pro inkjet printer range. Priced at £799 in the UK and $999.99 in the US and aimed squarely at 'serious' professional photographers, the Pro-1 is pitched as the world's first 12-ink system.

Strictly speaking, it houses 11 coloured inks (five of which are dedicated monochrome ones) plus Canon's new 'Chroma Optimizer' that's designed to cover the bumps between ink droplets, levelling the print surface and boosting its glossiness.

Similar to Canon's previous range-topping A3+ printer, the Pixma Pro9500 Mark II, the Pixma Pro-1 uses Lucia pigment inks for improved fade resistance. Light fastness for Canon semi-gloss Photo Paper Plus is rated at 80 years, with prints on the same paper stock stored in an album said to last over 200 years.

With a capacity of 36ml, each of the Canon Pixma Pro-1's 12 ink tanks holds 2.5 times the ink of those in the Pixma Pro9500 Mark II's 10 tanks. It might prove to be as thirsty as its stablemate, but at least it should mean less frequent cartridge changes.

However, handing over £360 or $425 for a full set of Canon Pixma Pro-1 inks still doesn't feel like such a bargain.

Connectivity has been updated too. Although Canon continues to offer USB 2.0, rather than USB 3.0, the Canon Pixma Pro-1 also supports Ethernet, making it easier to integrate into a network.

It's a heavyweight printer in every sense of the word. Weighing in at approximately 27.7kg (almost twice as heavy as the A3+ Epson R3000), the Canon Pixma Pro-1 is the largest, heaviest A3+ printer we've ever tested. The 'two-man lift' warning stickers our test unit's packaging certainly caused raised eyebrows

Although it might be the size of an air-conditioning unit, thankfully the Canon Pixma Pro-1 isn't styled that way. In fact, it makes earlier printers in Canon's Pixma Pro line look, well, a little cheap.

Taking design cues from Canon's high-end EOS camera bodies, the Canon Pixma Pro-1 has a distinctive, curved and minimalist style. From the two large silver buttons on the front, to the reassuringly heavyweight trays and lids, there's a premium feel to the Canon Pixma Pro-1.

The 12 separate ink tanks are accessed via the two front panels. Pressing the release button on the top of the printer opens these, and replacing the cartridges is a straightforward process.

Out test unit arrived with the print head and half-full ink tanks already in place. We had to replace a number of the tanks, but their large capacity meant that none of them ran dry during the considerable load of our tests.

Under Canon's standard A3+ testing, ink tank life is put from 90 photos (Chroma Optimizer) to 505 photos (Matte Black) and we have no reason to doubt these figures (with only one full set of inks supplied with our printer, we couldn't measure this under test conditions).

According to Canon, the Pixma Pro-1 is also said to produce 'photo lab quality speed', with a standard A3+ print delivered in approximately 2m 55s.

Naturally, print speed depends on many factors, including picture content, print medium, border size and whether default settings are used or not, but we recorded a standard A3+ print speed of approximately 4m 03s.

Switching to high quality output more than doubled the print time to around 9m 40s, while a typical high quality A4 print came in at around 3m 40s.

At least the Canon Pixma Pro-1 is hushed in operation. Aside from the mechanics of resetting, mixing and flushing typical of a pigment inkjet, during printing it proved surprisingly quiet and unobtrusive.

Unlike the less expensive Canon Pixma Pro printers, the Canon Pixma Pro-1 doesn't come bundled with a copy of Photoshop Elements, but it does include Canon's Easy-PhotoPrint Pro plug-in.

This enables you to sidestep the regular printing menus in favour of this all-in-one interface for colour management, layout style, and print order.

If you choose to use your software to control printing directly instead (we used Photoshop CS5 on a MacBook Pro 2.4GHz running OS 10.7), you can of course opt for the software to manage the colours rather than the printer.

This automatically disables the Colour Matching in the printer driver, avoiding the inaccurate colours and casts caused by double profiling in both the software and printer driver.